RISE (Research methods In School Education) is funded by King’s Widening Participation and was established in 2016 as a collaboration between researchers from HERON and The REACH (Resilience, Ethnicity and AdolesCent mental Health) Study. RISE aims to engage young people on the topic of health inequalities, deliver research methods training and inspire young people to think critically about local community health. By creatively engaging local secondary school and sixth form students currently underrepresented on KCL undergraduate psychology and other health-related programmes, including nursing and medicine, the project also aims to encourage young people to stay in education and develop a career in science and health-related professions. Using a Youth Participatory Action Research (YPAR) framework, students from the RISE pilot course contributed to co-producing and improving the intervention so that an effective learning experience could be rolled out more widely in secondary schools and colleges. Please follow the link below to our paper describing and evaluating the process of co-producing RISE using a YPAR approach and the key learning points derived from this process.
Involving young people through co-production and widening participation approaches: Reflections from school-based engagement

Following the success of the workshop series at CTK Aquinas Sixth Form College in 2016 (see below), HERON was awarded further funding by King’s Widening Participation to run an extended version of the course from September to December 2017. The workshops were incorporated as a 10-week cross-discipline elective module; an official part of the college curriculum as part of CTK’s aim of providing key skills for university and employment. The course consists of 9 one-hour interactive workshops elaborating and extending upon the A-level Sociology and Psychology curricula by teaching research methods in an engaging way.  At the end of the course, students were invited to deliver a short presentation on what they learned in front of a panel of academic researchers from KCL. This event was held on the 13th December 2017. All students received certificates and book vouchers for completing the course, and special certificates were awarded for the best group presentation, and best individual speaker.

In August 2016, HERON was awarded funding by King’s Widening Participation to expand on work with local colleges and implement a series of workshops. The educational intervention, RISE, was piloted at Christ The King (CTK) Aquinas Sixth Form College which has a high number of ethnic minority pupils often under-represented in higher education. Using a Youth Participatory Action Research (YPAR) framework, students contributed to co-producing and improving the intervention so that an effective learning experience could be rolled out more widely in secondary schools and colleges.

16 students applied and were accepted onto the course which consisted of three 2-hour interactive workshops elaborating and extending upon the A-level Sociology and Psychology curricula by teaching statistics and research methods in an engaging way. Throughout the three workshops, published studies of local community health data, including the South East London Community Health study (SELCoH), were used as illustrative examples of how to apply research methods to real data, relevant to their community. Themes covered a range of health related topics including mental health, illicit drug use, health service use, and discrimination. Using the skills gained from the workshops students used the presented ideas on community health to inspire their own research designs to tackle health problems most important to them. Facilitators mentored four separate groups to prepare their research design for presentation at a final event on the 8th February 2017, where students presented their work to an expert panel of researchers at King’s College London. At the end of each workshop and the final event, researchers collected feedback from students through feedback questionnaires in order to improve the pilot intervention and gauge the success of the public engagement activity. In addition, a focus group was conducted with seven students two weeks after the final event.

The RISE course at CTK was co-presented at the Engaged Learning Conference in Sheffield by RISE members Sanchika Campbell and Dr Stephanie Beards on 6th-7th July 2017. See here for our paper describing and evaluating the process of co-producing RISE using a YPAR approach and the key learning points derived from this process.

On the 26th April 2012, HERON ran interactive workshops with Health and Social Care BTEC (level 3) 1st and 2nd year students at Lambeth College. Titled ‘Understanding inequalities and the impact they have on health: findings from a community sample’, the sessions aimed to disseminate findings from the South East London Community Health Study (SELCoH) and stimulate wider discussion as to what the main factors causing health inequalities may be. The sessions were delivered by SELCoH research assistants, Bwalya Kankulu, Billy Gazard and Natasha Smyth.

The session focused on looking at the socio-demographic and socioeconomic determinants of health inequalities in South East London with the aim to provide:

What the students say.... 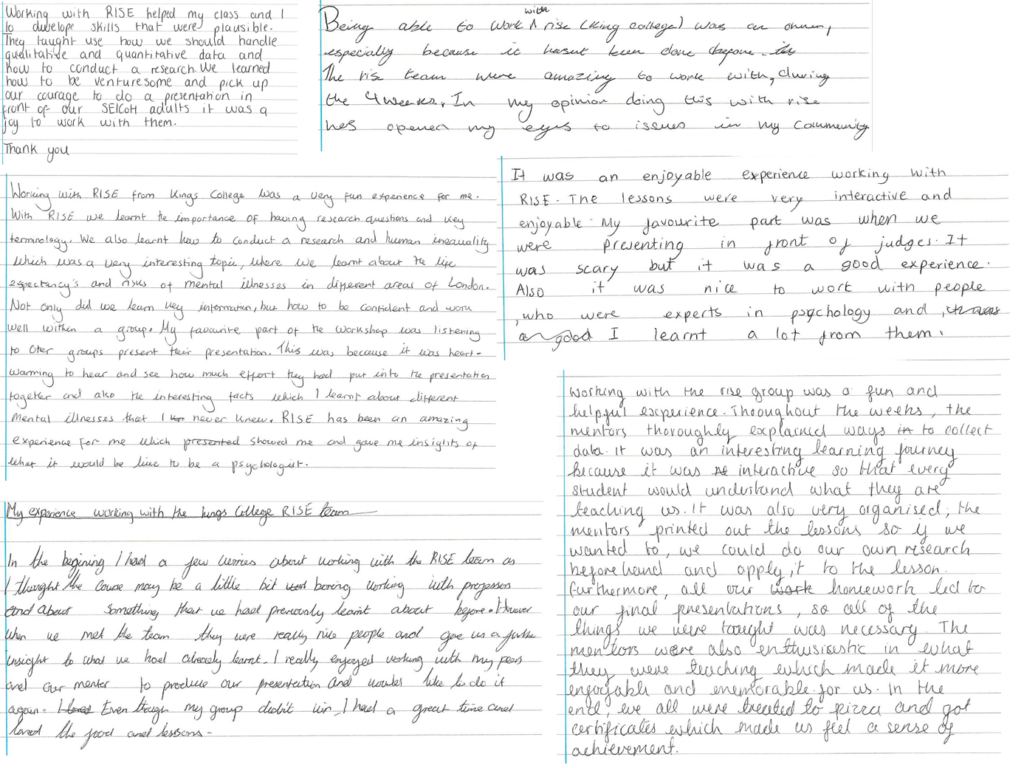